Today, Saturday, we went to Greenfield, one of the Saddleworth villages.  Our friends there are married and both come from the villages and we visited them on the occasion of the Saddleworth Rushcart.  I won’t go into that suffice to say that a large group of Morris men process and dance around the various villages and on the Sunday lay rushes at one of the local Churches. 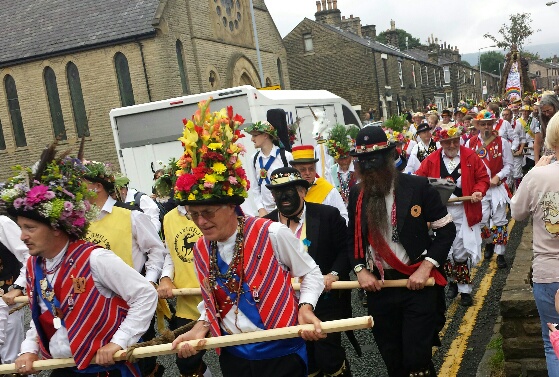 Afterwards we walked to Uppermill, the village from which our friends had been married and christened both children (in the Methodist Chapel). We’d been there a few years ago for the Brass Band parade day.  The place had been absolutely packed, pubs overflowing, children everywhere, a dozen brass bands processing up and down the main street.  Uppermill, along with the rest of the Saddleworth villages, lie in steep sided valleys, once busy with mills, to the north of Oldham.  They must have been busy industrial places at one time but now are ‘villages’ in the sense of feeling like they are in a rural area.  The moors and hills dominate and the architecture although it has the grandeur of the old mills is nevertheless tamed and domesticated.  There are a lot of old things around.  I recall a really old Co-op building in Uppermill and a still standing (but unused) petrol pump marked with gallons in Greenfield.

The place on the day of that Brass Band competition already seven years ago, felt oddly ‘white’, ‘white British’ as the census and other data gathering excercises euphemistically call it.  After being now a good few years in Pitsmoor it felt even more so, even more ‘ethnic’: Uppermill felt like an outpost, almost a survival of some Englishness.  I think already at the time of the Brass Bands I commented on this to our friends, that there were no Pakistani shop keepers, that the village had stayed quite so ethnically white, English.  Was it a place that people moved to I asked?  An area of white flight?

This time Uppermill seemed even busier than before. It felt bustling and again like an ethnic enclave.  The Brass Bands, the Morris Men and the Rush Cart are themselves survivals and in a sense the whole event around them, the very people and their ways of doing, of being, became elements of ethnic practice and, I think, avowedly so by the participants. They, the participants and this includes the locals like our friends, are both part of a survival and fully conscious of this role they have to themselves and outsiders.  The locals and those coming in from outside, must be seen in the same context as the ‘native’, the informant in anthropology.  The assumption that they (the natives) didn’t know already what the anthropologist was searching for is false: we are better to assume that each of us in the interaction have at our core the potential to know what we think the other wants.  We and they should give respect, not in the soft term of meaning a civility alone, rather respect in the violent sense, the fashion in which we respect a wolf whose presence we expect to avoid (except for hunting, capture or private observation).