Patrick Duggan is dead. Pat. Queen’s Scout. Moustached. Flat cap. Always in order. Ready. I’ve been over contemplating death these past few days and I seem to have landed one big like a fish. He was found by his friend Norma on the bathroom floor and Saskia rushed over and pumped his heart until the medics arrived and they worked on him for half an hour but could not revive his life. Fit all the way through until the last two weeks when he had breathing problems stomach aches and today at 10 am he was due at the doctors to hear the results of the test. But one way or another he died naked on his bathroom floor. There is nothing sad about that. What I find strikes me more than his dead body are his dead objects. He was a man who never married and lived with his mother to her death and had around him household things, decorations, photos with such a long history to them. Victorian accoutrements that actually had memories which were his family memories. One or two of the stories I do know but as he had no living family besides his cousin there is nobody to inherit. It’s the end of the memory. Embodied in objects. Norma his partner was stoic despite finding him dead and I realised that she, like my father, remains stoic because the other choice is collapse. I was tearful talking to her and she asked me to stop which was fair enough. I think it is the thought of those objects finding their way to junk shops to antique shops which would we perhaps even worse. 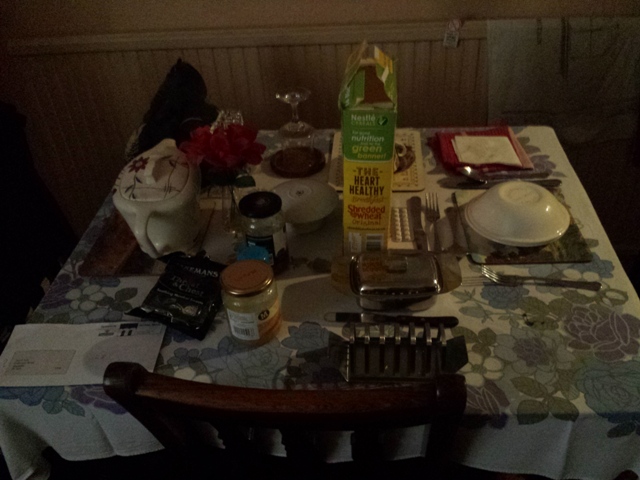 The photograph is the photograph of Pat’s table. Every meal was laid ready on the table after the previous meal. So he will have laid his breakfast table out the evening before he went upstairs. Underneath his sideboard has shoes with a shoe expander in them. His clock chimes the quarter hours. His jacket neatly hung behind the door.