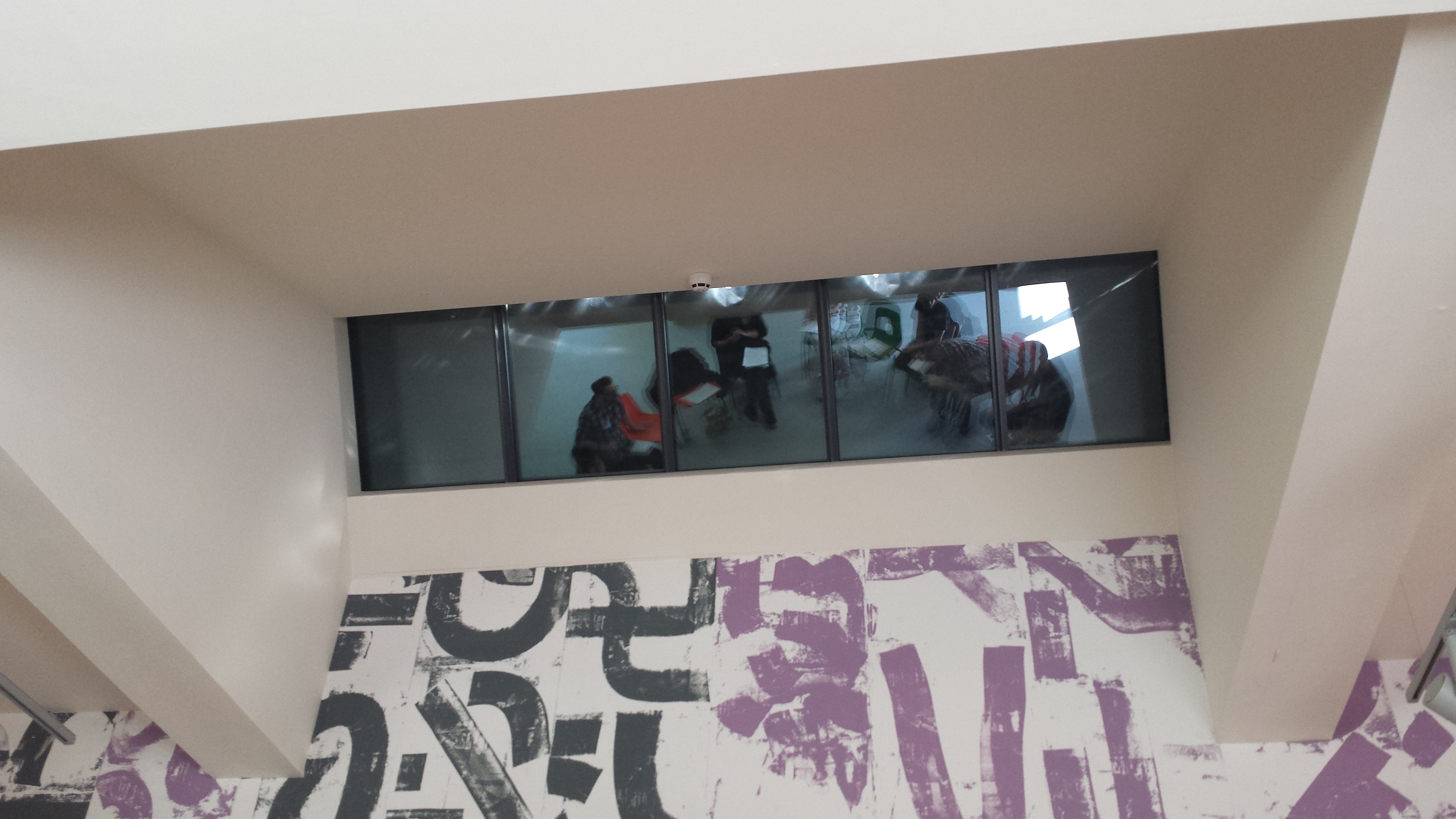 Well thank you for allowing me to take part in the workshop last week. I’m not an artist even though once in response to a question I asked an artist I was told that if I did what I was proposing that I’d have to accept I was an artist. But I never did it. Although it is still there in the back of my mind and I’m fully expecting somebody else to already have done it. In fact I think they have. Anyway.

I made notes on a couple of sides of A4. I wanted to write them up immediately but was distracted and now, after the weekend, I can’t reproduce them clearly as I would have liked but I’ll write them down at least.

I must have been wondering what it was that was specific to the artist? Was there some formal comparison between validating the artist and validating parenthood? Somewhere in that question I was comparing the artist to the actor and seeing them both as part of an institution and having a personal journey. I wondered how much an audience was needed? What was the motivation? Was it just to create work? Something along the lines of self-discovery crossed my mind, the discovery of truth as if the artist might be in some way a priest.

Buddhism: the evil Buddhist is the one who seeks to be perceived as cool, sublime perhaps, artistic; the good Buddhist the one who is artful.

Those nasty tensions between “playing the game” but “losing street credibility”.

What if anything is actually free of the state? Does the state practically form both questions? Does it generate the context of both art school and personal validation? Can it be escaped?

Banksy needed the validation of some sort of third space in order for the particular context of the work to exist. He didn’t validate that space by putting works of art there, the validation was done by myriad taggers. They remain the permanent outsiders. Forgotten. He Is the General. They are the foot soldiers.

What’s happened to all of the frustration? The anger? The insecurity? Where do they communicate with validation? Isn’t it true that you can just “blow it” that way?

The world of the gallery. A setup world of influence, of flirting, of who knows who.

Gallery validation just isn’t stable. It always begs the question about all those artists who quite simply just aren’t here.

Validation by work. By peer network. A network of influence.

And some sort of relationship between the audience and the curator.

Where is fame? What does that validate.

Did somebody say class? I don’t think they did.

How much validation is needed? How much is validation needed? It depends on the mood, how people are feeling. It’s important to maintain integrity. Art is a very rich thing but we should engage with people rather than talk of people.

Art should be useful! Art and society. We are back to this again. Forward or back?

The University offers some sort of powerbase. A fixed paradigm but how to escape the paradigms?

Here I started to dream whilst still awake; I caught a tortoise in my dream.

De validate the Validators! That was a call to arms.

Does this group want some sort of control?

Validation as a document; ethics is some other sort of discussion.

Someone reminds us of the story about doing it for ten years and if is not working, moving on.

So when to give up? If something is unrequited like love or art, is it unrequited validation?

Fame again: the level of fame is very personal. A big fish in a small sea and all that. 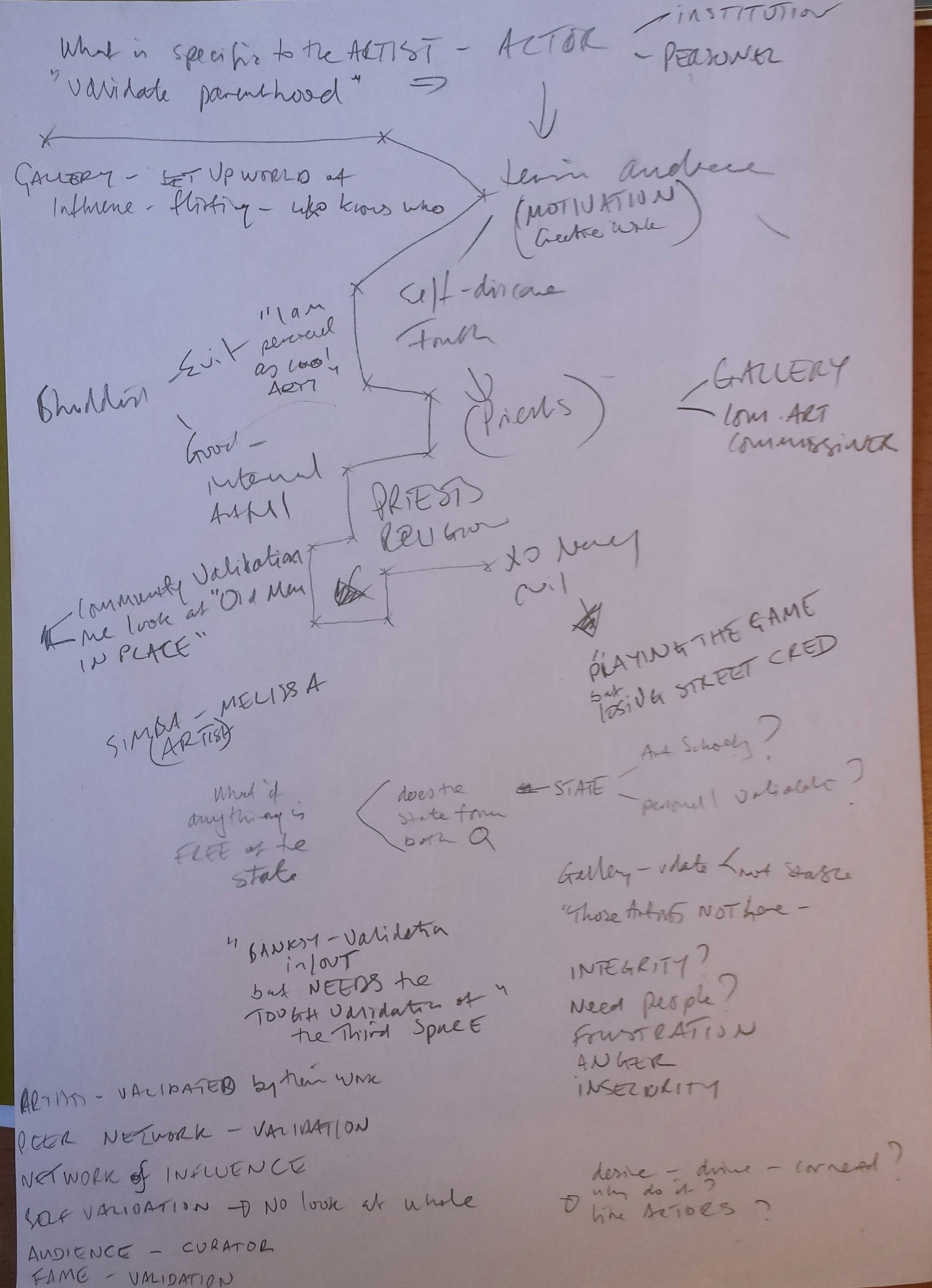 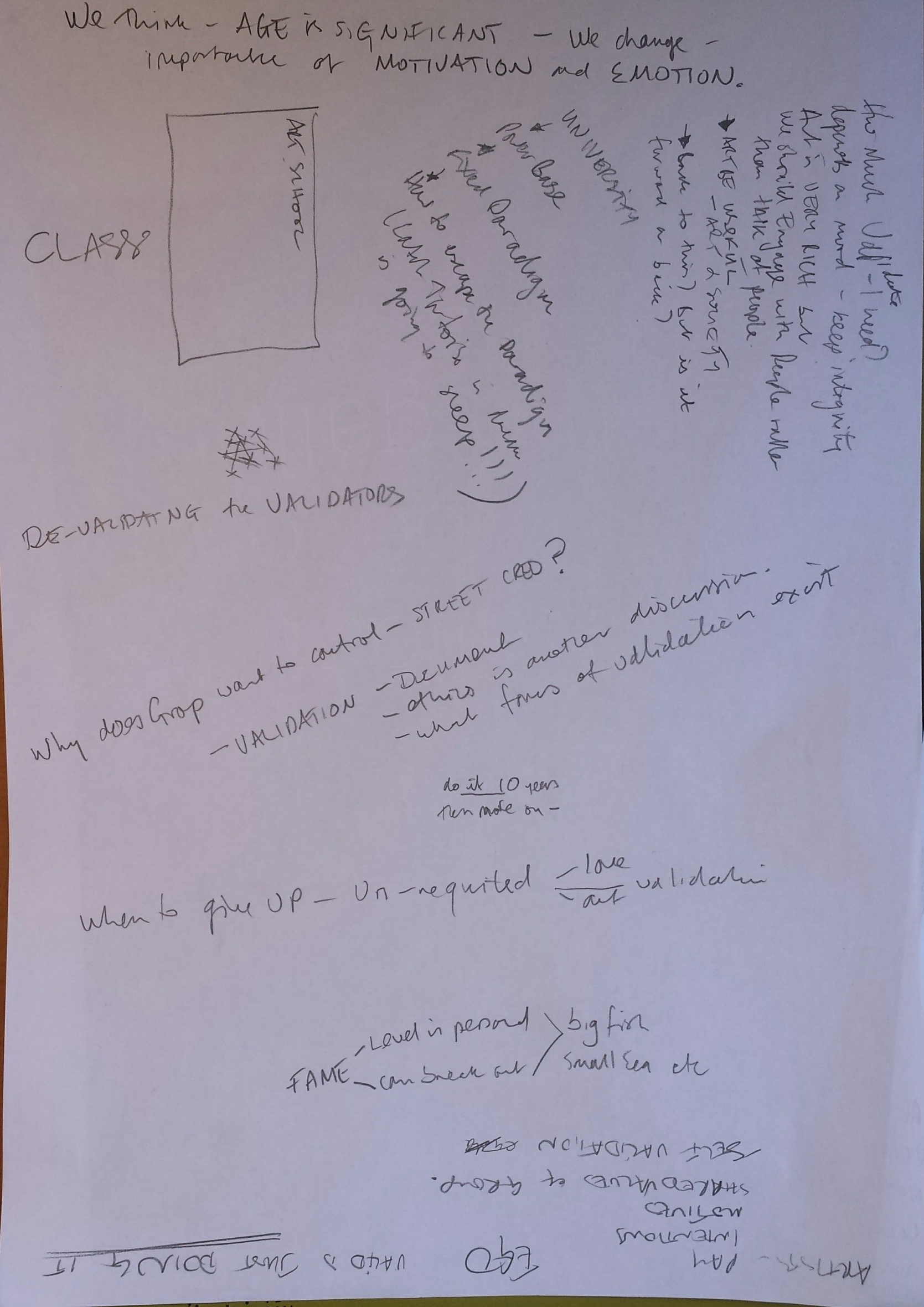