I attended the Church of England service at the multi-denominational church in La Siesta.  It is known as the Church of St Paul and St Peter I believe.  It is set in a small wooded area next to the new medical centre (over large my father believes due to local corruption in building commissioning) and near the Norweigan centre too (various support offered by the centre).   I walked there through the park where we play petanque and along the roads past the gates, the walls that protect the houses on the estate.  Houses are on plots of various sizes but they are all very private in one way or another.  The smaller plots like where my father lives are on the Calle with no vehicular access, they are more or less private roads which are used little by those not living on them.   Effectively I can walk along the roads here and have no idea who is living where, high gates obstruct views into the properties, various mattings are used to block the view through fences where plants will not grow. There are a few houses that have been very ornately arranged, these appear, or are held to be, lived in by Spanish people. Similarly the café premises are held to belong to the Spanish and not the British who run their businesses from there.

I make it to the church just as the last members of the congregation arrive and I slip into the back of the building and take a seat in the last but one row.  I am immediately struck by how full the church is.  The building is white with a nave and a two side chapels set off from the altar.  The one to the left, the south, houses the organ but both are empty although they have seats.  The nave has around 50 people sitting in it, a fair mixture of men and women although I do not count the relation.  I note once again this particular coloration that seems to surround older British people, a pastel shade with grey.  I am also struck, as before in C of E services, by quite how ‘high’ church they are. I have a hymn book; a Songs of Praise BBC published version and an order of service and responses.  We stand up and sit down and respond to phrases said by the Priest.  He is standing at the front, with a microphone at times and he intones, in what I imagine to be an old fashioned way.  He speaks in a way that is somehow allowing him not to be part of what he is saying, he is abstracted from his own voice, like he has set him self aside to allow him to offer his service, his ministry.

I feel, again like something from a past I never lived, that he is looking at me, peering to see perhaps who I am, maybe he is short sighted, or to make sure that I recognise myself as being not from here, or not a member of the congregation, or even potentially, if it were the true past I never lived, that I am perhaps a sinner even.   As he speaks I note, thinking about a conversation the other day about the Da Vinci code and the woman in the last supper, that the Christ figure in the shrine on the wall behind the altar is very effeminate.  I wonder if that is there to be a multi-faith, non sexual, non denominational figure.

I hear that it is the second Sunday in Lent and that we are going to celebrate St David and (so the English don’t feel left out) St Chad from the Midlands.  We sing hymns, as always they are just that little bit too high for comfort but people sing with some confidence and the organ playing is lovely, as it should be. We have a reading from the Old Testament, part of the story where God promises his blessings to Abraham including that his wife, Sarah, will bear a child despite their advancing years (Abraham was 100).

The Priests eyes roam the congregation as others take the readings.

The second reading follows the theme, Romans ? 4, 13-23, recounting St Paul exploring the idea that Abraham had been of such faith that God’s grace intervened, thus we need grace.  We hear a prayer, for various individuals, the family, the nation, the family of nations, the belief in the Cross avoiding raising any of these too high.  I hear that destroying the nation is a breach of God’s order.

A collect is held, everyone but I goes forward to receive communion, I am invited for a blessing which I refuse.  We greet each other at some point and it is shaking hands but also a general kissing and hugging, something I have been told happen at Catholic services too (to the horror of the lapsed but spiritual Irish catholic who told me).  Notices are given of various activities over the coming weeks.  We sing happy birthday to the Priest.  There is a service in two weeks held by the Norwegian Church.  Outside I greet the Priest who is distracted.  I take some water, others are drinking wine, talk to one man at length about health and health services.  The congregation come from far and wide, he was from 10 km away, there is a larger congregation at the church near the new hospital.

I speak to a man who tells me that the English organise many activities in the area.  This same man is highly complementary about the local hospital services; he is suffering from increasing loss of sight and is being well treated at the hospital.  Much of the work up to now, he explains, has been done on insurance, so it has been promptly dealt with.  It was at this point that I discussed the need for translators when people attend the doctors.  He said that the Spanish don’t want to help at all, this said in response to my saying it upset me to think that people needed to pay to be able to say to the doctor they were having trouble peeing.  At this point he said that the Spanish had been quite angry when the British started to organise a Neighbourhood Watch.

I arrive back to the house to enter a conversation about immigrants getting the work in on the building sites for the Olympic games.

Later the three of us go to a French woman where she lives with her Belgian partner in his house.  They have two friends visiting and we spend the afternoon chatting, playing scrabble (the women) and table football (the men), eating orange cake, crepes, home made jams and French honey and jam, drinking coffee and fruit juice.  The woman is my father’s bridge partner and she is here for 5 or 6 years now.  There are fewer francophones around and the group (without me) converse in a mixture of Spanish and French with English the minor tongue.  They live in a new build on the edge of Quesada.  The neighbours are a mixture of German, Dutch and English.   He bought the house from the plan and at the time it had a view of the lake which is now obscured by the skeleton of a house not finished due to the recession.  We discuss difficulties caused by dogs defecating and owners not clearing up.

Later we eat at the Chinese.  Again the oddity of a colour scheme that appears to be of age, this pastel shade of the clothing.  The place is not so full as last night when I went by but it is earlier, still it is busy with a constant flow of people coming in. Not all are English but all appear north European.  The TV is set to a Spanish channel.  The waiters are all young and all staff are Chinese.  Menus at 5.50E includes an aperitif, snack, first and main course, desert/coffee and a digestif drink.  Each meal you buy gives you a token and with the token you can claim a gift from the cupboard on the wall, knick knacks, jewellery, vases, from things for 2 tokens up to 40 tokens.  Like a fairground.  We see someone my father knows there. 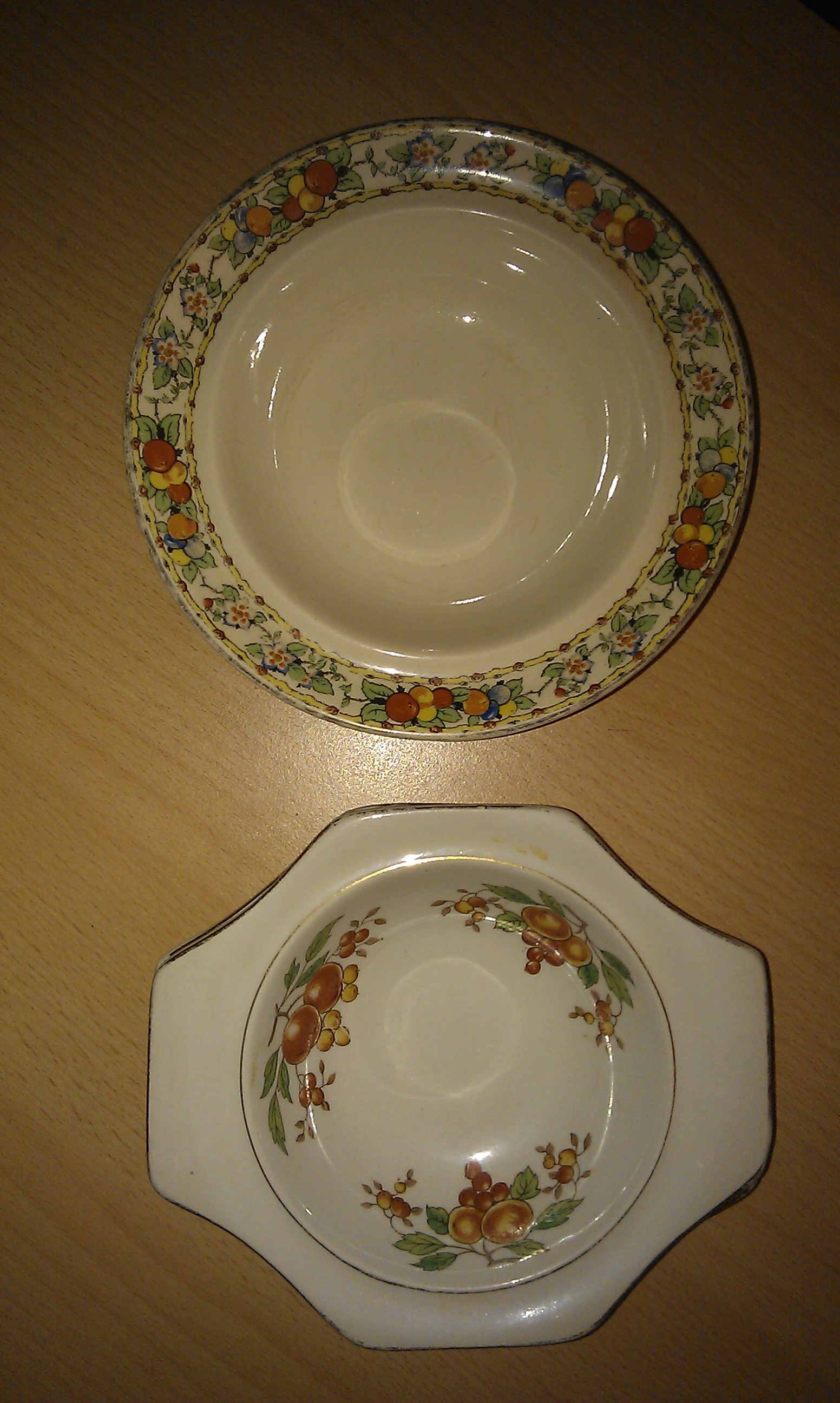 After we drive to my aunts where we meet up, six of us, my two aunts, one partner, my father and partner, myself, to play scrabble, drink tea, eat small cakes.  My aunt gets out some bowls from my Grandparents wedding service.  The bowls amaze me, recalling so many desserts, custard, apple crumbles from childhood.  I realise they are the reason I am so drawn to the 1930s colour schemes in china.  West Ham won today.  Football is discussed but the telly is not on this evening.