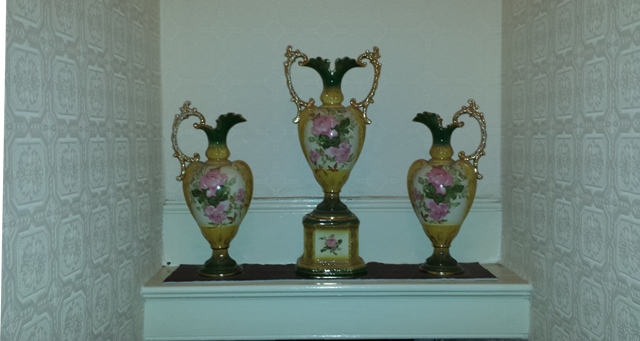 Patrick Duggan died several weeks ago now. For a variety of reasons I have taken on the task of boxing up items in the house which are not wanted by either of his cousins know by the Scout Association. I have found this tiring and taxing emotionally. Patrick is not my family and I know very little but the reference points of his life are, obviously, recognisable to me as we are both British. He died at the age of 76 always having lived with his mother and being an only child. He had lived in the house here on Holtwood since 1952 and before that down at the bottom of the hill on Atlas Street, in an area of housing above the steelworks now completely demolished. This family, Irish at least on his father’s side, had lived in the area since the 1890s at least. The house was full of bits and pieces that dated from this period onwards. They had been what my mother called respectable working-class. Even back in the pre-First World War days they had a small haulage business, which meant they must have owned a flatbed trailer and a horse. Patrick had a very good memory and I know that he knew many of the stories that link together the vast number of photographs and odd bits of paper and records and ornaments which lie around the house. Without his knowledge, and there is nobody really to put it all together, the items begin to lose any coherence at all. This has happened to so many people’s objects as is evidenced by the clutter found all over junk shops and of course in antique shops as well. So it is annoying in some way to have to pack all these things up and make decisions that pull things out of context and put them into a new set of relations, those that live set up, things that I bolted together.

Saskia had said to me maybe you could keep some for Abbeyfield House? She had been particularly moved by the collection of old toys which had been kept. She wanted some sort of memory box connected to Patrick. I don’t like the idea particularly of commemorating him like this. Fran, from down the road, she too had suggested to me that maybe something for Abbeyfield house might be a good idea? If not World War I then other periods could be represented. Wendy to who was over yesterday evening for a drink suggested that a box of objects like the briefcase of bits and pieces I was showing her might be interesting for children to look at. From these exchanges and from my dusty hands has emerged the idea of bringing the items to Abbeyfield house and putting together a series of memory boxes. Collections of oddities and items from Patrick’s house which could be used as the basis of activities with children and adults. This would give a fantastic context to this collection of items which emerge in this area over the last hundred years. Suddenly the locality of the things in Patrick’s house would once again have a sense and would not be lost. So now I have to contact Alan and Mary and Norma and get their permission to donate objects to the house.

So the decorative bits and pieces, like the ornamental vases in the photograph, might suddenly find the context once again that keeps them closer to their own very local biography.