I am aware that I am experiencing myself as increasingly bitter. Two evenings ago I vented my frustration and bitterness about Saskia’s parents.  This I did in front of her cousins, Hilary and Jake, the latter someone who had been given great hospitality as a child, love and warmth, by Patrick and Diane, when his parents separated.  My bitterness did not to go down well.

There was a funny side to this event – for me at least.  The following day I was silent and humiliated by my own behaviour and Saskia’s pain.  I even watched a film with the children, it was a moral tale, as ever, about not being bitter.  One of life’s little conventions, synchronicity.  The film was “Meet the Robinsons”, a story about a couple of orphans.  One, Michael, is a potentially great (autistic style perhaps being modern) focussed inventor child who can find escape from loneliness in the orphanage through his inventions. Of course he needs recognition to do so, it is not an internal journey alone.  The other child, Goob, rather slow witted, becomes embittered just as the inventor child gains freedom and (eventual) success.

This second child, Goob, the anti-hero, set in eternal bitterness and resentment by his failure to catch a baseball (due to the sleepless night as the inventor Michael works on his great plans) wreaks havoc on the happy lives of Michael and those who benefit from the inventor/hero’s work.  I watched it like a child, seeing the basic message and almost in tears.  Looking for an answer I watched to the end… How does one overcome bitterness and anger?

The bitter orphan Goob finds redemption (we assume) when his past is changed by Michael waking him up in order that he catch the missed ball.  So the anti hero emerges free of bitterness but it required the hero to rescue him, to change the very course of the past to rectify the present – in other words exactly what the anti-hero wanted!   The was no internal change of heart – it was always external circumstances requiring at the very least God (technology) to initiate change.

It was Goob’s bitterness that was the route to Goob’s redemption and the eventual redemption of Michael’s world.

Bitterness has reasons.  The present is tainted and bloody.

That’s how Canada feels to me.  Tainted and bloody.  I’ll get over it soon but before I do and before I forget I’ll recall the information panel I saw on Prince Edward’s Island.  We spent a few days there on at the start of our few weeks here and on the second day walked down to the beach at Cavendish where we were staying in Anne of Green Gables Bungalows.  There’s an area of dune and a lagoon near the beach and we walked the boardwalk along side the lagoon back towards the cottage. 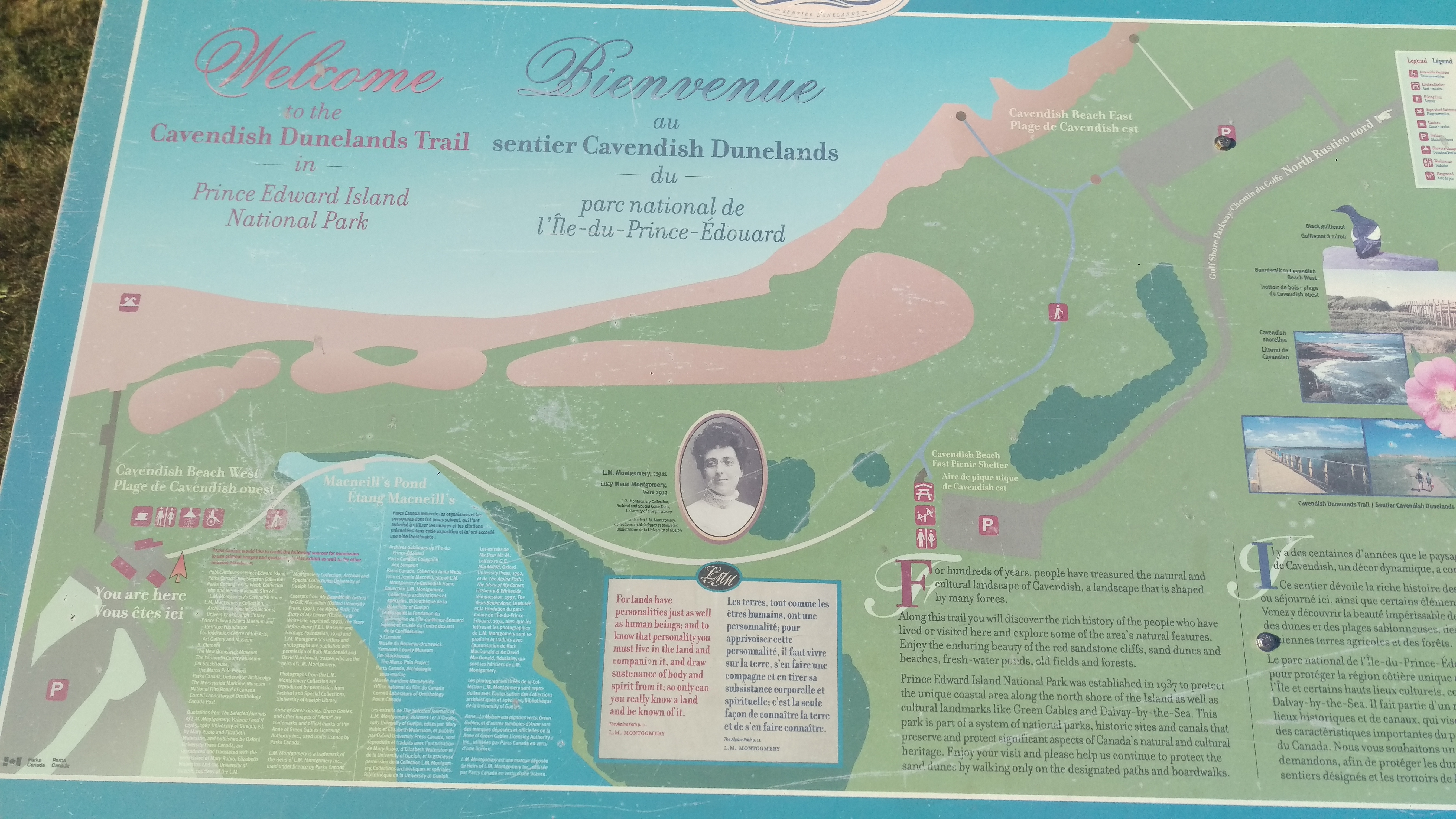 The book Anne of Green Gables was written by L. M. Montgomery and naturally enough, given the location of the dunes and lagoon near the fictional location of the book, an area known and frequented by the author, the inspirational landscape of the book, information panels told us of the history of the landscape and it’s connection to the author.  I was horrified.  The panel reads:

“For hundreds of years, people have treasured the natural and cultural landscape of Cavendish, a landscape that is shaped by many forces.  Along this trail you will discover the rich history of the people who have lived or visited here and explore some of the area’s natural features.”

As a starting point: Where are the people who were already here in this landscape?  Montgomery’s tale sits on the lap of their destruction.  Where are they?  Why are they not the starting point?  Later a panel goes into the natural history:

Where are the people? What species were they?  What were they called?  In an unintended politeness, an unwillingness to treat the indigenous, first nation, aboriginal as a species, like an animal, they are actually allowed to disappear from the record.  A tree species list acts as a safe cipher for a people and culture.

It sickened me this panel and has coloured my image of this land as it now is.  Tainted and bloody.

Of course it is rude to bring it up.  Pointless for some.  Offensive to others.  Uncomfortable for some. Misplaced and over for others.  Yet there is a process that is taking place, one of forgetting, of naturalizing what has happened, what happens.

It’s not that anything is to be done, I know.  Not my place to do it either. Or to feel it. Yet I do.  It’s here that my energies lie.  My sympathies. I’m on holiday in a giant graveyard while the burials are still going on.